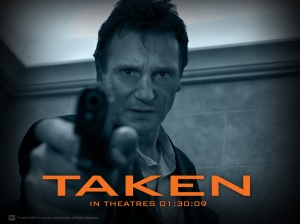 Taken opened in theatres on January 30, 2009 and has been ranking forth on the movie charts week after week ever since. The movie is about an ex-spy (Neeson), who’s daughter is kidnapped while in Paris, and his ability to single handedly bring down the gang who took her and ultimately bring her back home safely.
The movie is an action packed thriller, which according to most who saw it and have reviewed it claim will have you on the edge of your seat from start to finish. I actually don’t want to see the movie, even tho I am a fan of Neeson, because of the subject matter.
I often wonder why some movies tend to outlast others at the box office. I understand the audience this type of movie may attract more so than others (young thrill-seeking moviegoers), but I also think, timing is everything. If you think about it since January 30, 2009, we haven’t had a single descent release which could have knocked Taken out of the running. As a result the movie is still on the charts and is able to pack a full house.
So, I welcome those who have seen it to jot down what they thought of the movie and perhaps tell me why you think it has outlasted all the movies released since January 30, 2009?