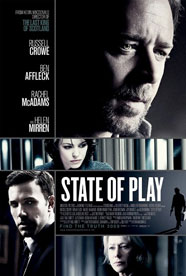 State of Play open today in theatres everywhere, the film starting Russell Crowe, Helen Mirren, Ben Affleck, Rachel McAdams, Jason Bateman is a story about a journalist’s involvement with reporting the death of a congressman’s assistant and a gunned down thief.

Russell Crowe, plays reporter Cal McAffrey, who determines through his own research that the two deaths are connected and is a conspiracy to frame his friend, the Congressman Stephen Collins, (Affleck). Against his editor, Cameron Lynne’s (Mirren) approval, but with the help of an ambitious rookie journalist named Della Frye (McAdams) he sets out to connect the dots in resolving the mystery and as they get closer to the case, they too become targets and part of the elimination process.

The concern I continue to have about movies such as these, is that they have the same storyline, the same plot, the same cat and mouse game between journalists, cops and politicians. The story spins a web of nothingness in order to try and solve something, but most times end up with the same nothingness they started out with, leading the viewer into more confusion then before

No doubt, a talented bunch the cast is, Helen Mirren and Ben Affleck look polished and fit their roles nicely. Russell Crowe, I wish was a bit more clean and trimmed, it is really hard to watch him looking so tired and as if he hasn’t taken a shower for days on end (without his Gladiator attire that is). I also prefer to see Bateman and McAdams in comedy then drama.

My opinion is that the movie may do well opening weekend since there is no competition in the same category, otherwise waiting for the DVD won’t be such a bad idea on this one.