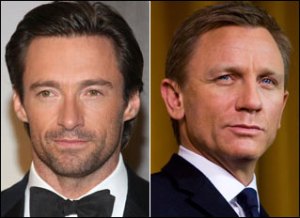 Hugh Jackman and Daniel Craig have signed on to star in a Broadway production of Keith Huff’s “A Steady Rain,” about two Chicago cops whose friendship is challenged by a puzzling domestic dispute.

Although tickets will top at $130, it is projected that won’t be an issue to see these two box office top grossing stars strut their stuff on stage. “Rain” will open Sept. 29 at the Schoenfeld and will run 12 weeks.