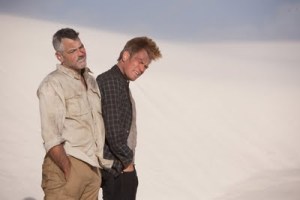 The Men Who Stare At Goats is a movie that of course I was never going to see, but when you run out of movies to see between the weekends and potential good ones, you just see what is available. So that is what I did, saw The Men Who Stare At Goats.
Funny thing is, I was completely amused by this film and laughed at several scenes, basically it wasn’t a complete waste of time. The movie had a pretty okay cast too, such as George Clooney, Jeff Bridges, Ewan McGreggor and Kevin Spacey and A Goat, so it all came together pretty well. However, the only actor who stood out for me was Ewan McGreggor and I suppose that’s because he was up against the major leagues, but overall the team worked well together.
Anyway, the story is about a down on his luck reporter, Bob Wilton (McGreggor) who, while in search of his next big story, stumbles upon a shady character named Lyn Cassady (Clooney) who claims to be part of a US military experiment team developing new techniques in fighting wars and dealing with terrorism. The team of course was lead by Bridges and Spacey’s characters and so the story unfolds.
The best scene for me was when Wilton and Cassady were in a jeep travelling through the desert and they come to a fork in the road. When Wilton asks which way, Cassady using the techniques he learned from the program, chooses right. Wilton points out that they had been there half an hour and how was it that the choice was a quick one, and as the camera pans out, you hear an explosion and the jeep flips over. This scene goes on for about five minutes thereafter with the men arguing back and forth, but you gotta see it to appreciate it, so enough said.
Anyway, silly as it may sound and stupid as it may look from first impressions, I say don’t judge the book by the cover in this case, keep the movie on your NETFLIX’s movie rental list and have a few laughs.

One reply to “The Men Who Stare At Goats – Post Viewing”