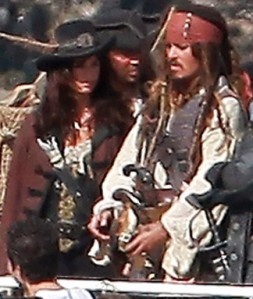 I was wondering what the synopsis of the new Pirates of the Caribbean film would be and so here it is: While searching for the fountain of youth, Captain Jack Sparrow (Johnny Depp) crosses paths with a woman from his past (Penelope Cruz) and when she convinces him to join her on the Queen Anne’s Revenge, he is not sure if it is because of love or a ruthless con artist attempt.

The film is set to be action packed and of course in 3D. There is adventure, mystery, blackmail and much more in store for us fans desperately waiting for the film’s release. I think I am more excited at the fact, Cruz is involved with this film, which will probably be one of the best in the franchise. I wonder if there will be room for more after this one or will Sparrow retire and make family.