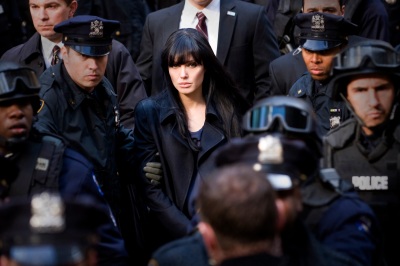 Shame on me. I had seen this movie a while back and realized I hadn’t reviewed it properly for my readers. Well, here it goes – to sum it up – I didn’t care too much for the movie.

The story is of course about a woman named Evelyn Salt (Angelina Jolie) who is a CIA agent. During the  interrogation of a Russian defector  by the CIA, she is pointed out as a spy to her boss, Ted Winter (Liev Schreiber) as well as other CIA agents observing the interrogation.

She quickly realizes she is being targeted and after coming to terms with the fact, she doesn’t have the support of the CIA, decides to go on the run in order to find the truth and save her husband from whatever potential trouble he may be in, as a result of her run in with the Russian mob as well as the CIA.

You think the synopsis could be/maybe interesting enough to consider renting the film, but in my opinion, it is simply a female version of The Bourne Identity. Jolie as usual is at her best when she carries a gun or two and sets out to kill everyone and anyone who gets in her way, single handedly, any individual who may be twice her size and weight, she has no trouble carrying out the task. The only highlight of the film was her reaction or efforts to show none, when she saw her captured husband by the Russian mob… Outside of that scene, the rest were pretty unbelievable and boring.

Anyway, it is what it is. See the film if you must and if you pass, trust me you won’t miss anything. But for a good film with Jolie, consider THE TOURIST instead, which is now playing in theatres everywhere.