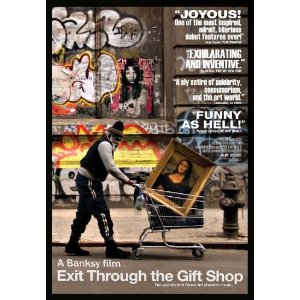 Although I understand the fact the film, Exit Through The Gift Shop, is old news to most people and a film review at this point is truly unnecessary, but as you know it takes me a while sometimes to warm up to a movie and then I  have to put my two cents in.

At first, or let me clarify, when the film Exit Through The Gift Shop was introduced to us all, I wasn’t really interested in seeing it because I figured it was a simple documentary about “street art”, underground art or Graffiti or whatever name they refer to it now a days. But a whole year after the film made it’s debut, I decided to finally see it. I must admit, I was completely and utterly impressed with the film.

Just to clarify, the film is intended to be a documentary (although you don’t really feel it) about an ambitious Frenchmen named Thierry Guetta, who was aspiring to become a some sort of filmmaker. In the process of filming just about everything in his life, he stumbles upon filming various street artists. His obsession with their work, leads him to the famous British street artist named, Bansky. The two form a band and in the strangest ways help one another find their ultimate calling. Bansky becomes the filmmaker and Guetta becomes the famous street artist.

The fascinating and most creative part of the film is the story in itself. I admit, while watching the film, I did not move once from my seat nor blinked an eye. It was entertaining, creative, wonderfully filmed, with brilliant story telling. By the end of the film, I felt more inspired to follow my calling and completely driven to reach my goal. Funny how a movie does that to you.

Anyway, please see the film, no matter who you are, it is to me a better version of a Facebook kind of story.