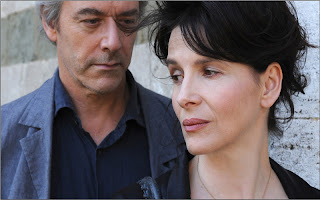 A week or so ago here, I had come across information about the film Certified Copy and was probably more than eager to announce it to my followers, with the feeling the film would probably be one of the best if not the best film released to US audience in 2011. I may have spoke too soon but then again I may not have.

First, I want to say the U.S. trailer is misleading. From it we gather middle aged woman meets middle aged man and falls in love while they walk the streets of a small village in Tuscany. The most problem for them, I figured was they were both married to someone else and had a problem figuring out how to get together.

However, when I actually saw the film, and without giving away too much, the entire storyline took me by surprise and left me totally confused with my emotions. I guess I should be able to say director/writer Abbas Klarostami did his job?

But, after I got home and was able to contemplate the film for several days, I realized that the film, although a touching (or not) story, wasn’t relayed very well  on screen. I think this is because sometimes when you are both the writer and the director in a film, you tend to forget how to transition from written form to film. And in the case of Certified Copy, it showed.

First of all  the film, although a touching (or not) story, it was flawed on so many levels. I say this because all throughout the film, there were several unnecessarily lengthy silent and off camera scenes which were  exhausting to sit through. Sometimes a message can be made without the extended play in my opinion.  In addition, the story was spoken in three different languages, so the core subject matter was very difficult to understand and follow when the characters jumped from English, to Italian to French within the same sentences. This to me is not creative film making, it’s a way to lose an audience. Lastly, as the characters, Elle and James (portrayed by Binoche and William Shimell) argued and discussed life and other matters, at the end of the day, their roles in relation to one another was pretty unconvincing and puzzling. I suppose Klarostami had trouble expressing nonchalant mannerism on film. The only thing I kept thinking was that I was watching two characters role play for several short films.

Now, the best part of the film was Juliette Binoche’s ability to transition from a happy women to a struggling middle aged parent with a teenager and then to a romantic and sometimes angry wife of a man who didn’t worship her as she needed him to. I think that alone gave the film the recognition and appreciation from various international film festivals.

With all that said, I still recommend the film, but I do warn this is a chick flick and most husbands will not appreciate being dragged to see it unless they are a true fan of indie or foreign films.

For a more explicit, sappy detail of the film, click here.