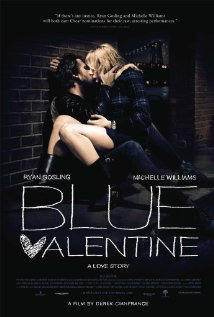 The film Blue Valentine, in my opinion, did not receive the proper recognition when it first opened in the US, hence it had a very limited engagement in the theaters and the funny thing was, I fell victim to the buzz regarding the film. I hate myself for doing that. Anyway, the fact I had the opportunity to see the film via cable and completely appreciate it from the comfort of my own living room, I think made up for my ignorance about the film.

The story is about a young couple who, as usual, have reached a milestone in their relationship. The decision to stay together or go their separate ways. Although from the way, director/co-writer Derek Cianfrance presented it to his audience implies it is from the husbands point of view, I can honestly understand where the wife was coming from, even though I felt more sympathetic towards the husband for trying so hard.

The film techniques used aren’t so amazing in the case of Blue Valentine, what makes it worth our while is the story telling. The struggle to work through a troubled relationship and the realities of how we, as humans, deal with them. The added bonus was the amazing chemistry between Ryan Gosling and Michelle Williams (who together also produced the film) characters. The only drawback, not to me of course, was the film border lined a touch of soft porn, but I guess that’s what made it work so well. It was important to show the audience how simple the characters were yet, in their separate ways, so complex and how sex played in those types of relationships. It needed to seem as realistic and relatable as possible to maintain our interest in this day and age of 3D film making.

I loved the film and until I saw it, I didn’t understand the significance of the title. Blue Valentine, the name of a raunchy hotel room, is where all the trouble started and the beginning of the end. See it without the kids.