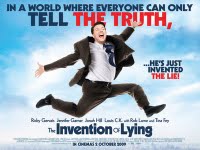 You know how sometimes a movie is a toss up, where you like certain actors in it but don’t know if you should really see it because you just have that hunch about it. Well, that’s The Invention of Lying for sure.
The best of the movie is Ricky Gervais and Tina Fey, the worse about it is everything else. Funny thing is that the movie started out as if it had potential but then it got so uninteresting that I just watched it until the end just so I could say I did it. It was disappointing to say the least to see such poor work from Gervais or perhaps not, I know very little about his work in the UK but do know he is the executive producer of The Office, so I am not sure if he is the best of writers however.
The story is about a writer who gets fired from the company he works for because he was unable to attract the masses with his script. The twist of the story, which is a brilliant plot, is that everyone in the town he lives in speaks what is on their mind, no hidden agenda, no sugar coating anything and as a result the writer, Mark Bellison (Gervais) is faced with one brutal blow after another as he lives his life. He is rejected by Anna (Jennifer Garner) and laughed upon by his colleagues at work and pushed around by others. He soon realizes that if he began to participate in the way everyone handles their daily rituals, he may become a winner and so the story goes.
What I think happened with the movie is that Gervais was unable to support his opening pitch, he presented an interesting introduction and had a very difficult time making it interesting enough to fill 137 minutes of film. There were touchy, feely parts especially when his mum is dying and you actually feel his pain but the love that blooms between him and Anna was pretty annoying to watch and the friends he hung out with throughout the movie did not pan out very well throughout the movie either.
Anyway, I don’t want to beat a dead horse, so all I want to say is that if you are a Ricky Gervais fan then go see it for him otherwise pass on the movie.