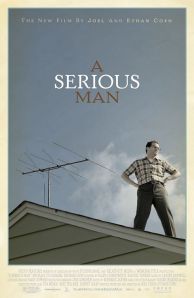 The movie Serious Man has been around for a while now and for some reason or another I kept putting off seeing it. Last night I decided to finally see it so that I can also put in my two cents worth as well.
The movie is a dark comedy set in 1967, about a physics professor named Larry Gopnik (Michael Stullbarg) , who lives his life oblivious to his surroundings until one day when his wife announces she wants to leave him for another man.
As his life unravels literally at the seems, Larry tries to find answers to his problems on a spiritual level, from the universe, through his Rabi, his lawyer and the beautiful neighbor next door. His frustration in life escalates, almost driving him crazy because the most he is able to get out of his quest are the following: “What is going on here” and “I/We didn’t do anything”
Without giving away too much about the story, I do want to state that this movie is interesting to watch, it pulls you in as any good movie should, it exhausts and frustrates you wilst experiencing his disturbing journey of self discovery and then gets you on the edge of your seat only to drop you from a ten story building as you aim to land on a mattress.
The point is, that although the movie is good, it has a way of leaving you feeling empty in the end because of the poor (unclear) ending. I suppose writers/directors Ethan and Joel Coen (Burn After Reading, No Country For Old Men) had a message to relay to us that only those familiar with Judaism are able to decode. Fair enough I suppose.
So my message to you is that, see the movie for sure and then interpret the point at the end any way you see fit, but see it for sure, it is a good movie and you won’t be disappointed.