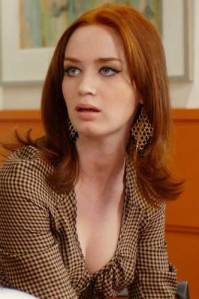 Apparently Marvel Studios has somewhat extended an offer to Emily Blunt to play Peggy Carter in the movie The First Avenger: Captain America. However, as usual “due to scheduling conflicts” she turned down the role.

It’s also noted that she had previously declined to play the Black Widow in Iron Man 2 as well, the role which was picked up by Scarlett Johansson.
I guess I am wondering if she just isn’t into the action movies? I prefer she take on more challenging roles myself, so I am happy for her to have “scheduling conflicts” when it comes to action films.