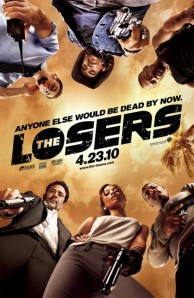 Pretty good movie comes to mind when describing The Losers. I must say I was not only impressed but completely entertained while watching it.
The story is based on a comic book series published by Vertigo imprints of DC Comics,and is centered around events surrounding and including the War on Terror. A Special Forces team working with the Central Intelligence Agency in the 90’s was betrayed and left for dead by their handler,named Max after completing a special mission overseas.
The group of five men referred to as The Losers regrouped with the help of a rebel named Aisha El-Fadil to return to the U.S. and kill Max. Upon their return they conduct covert operations against the CIA and its interests, uncovering startling operations led by Max.
The film directed by Silvian White in my opinion didn’t get the reviews it deserves. The story is solid, the film making technique a clear reminder of Frank Miller’s work and tastefully and brilliantly edited and put together. Best performance by Jason Patric as Max. I highly recommend the movie and if it is still playing in theatres in your area, by all means go see it.