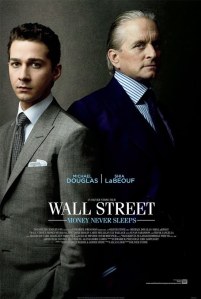 Just like most any working professional, I ran to the movie theatre after work the first Friday night the film Wall Street with Michael Douglas opened, and sat patiently through the advertisement until the lights dimmed. The funny thing is if you ask me what that movie was about, I have to say “hold that thought” until I get back to you. At the time it didn’t really leave a lasting impression in my mind.

Fast forward to a week from the new film’s opening night and I, once again am somewhat anxiously waiting for the 2010 version or should I say, part II, to open so I can see the finished product of a film that we have heard about for the last year or so. I hope it will be worth every penny considering how turned off I am with our country’s financial woes and corporations gone wrong. I suppose I enjoy watching Shia LaBeouf’s work and admire Carey Mulligan’s, so that might be enough to get me by.

Not far from my assumption about the plot, according to Jeremy Wheeler (All Movie Guide), he write as follows: Famous onscreen villain Gordon Gekko (Michael Douglas) returns to the big screen with Wall Street: Money Never Sleeps, once again directed by Oliver Stone. This installment promises a “ripped from the headlines” plot, with Gekko teaching co-star Shia LaBeouf the ins and outs of criminal investments. Frost/Nixon’s Frank Langella co-stars along with Susan Sarandon.

With that said, the film opens September 24th nationwide and I am hopeful that by then I will have a better grasp on the film in order to give my readers a fair review. Until then please stay tuned.