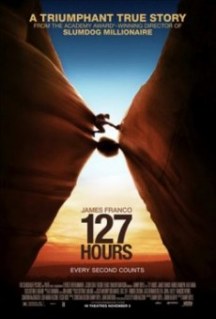 The film 127 Hours is based on a true story of a mountain climber (Aron Ralston) who becomes trapped under a boulder while canyoneering alone near Moab, Utah. The only mistake he makes is that he doesn’t tell anyone where he is and as a result has to resorts to desperate measures in order to survive.

Directed by Danny Boyle and starring James Franco, the film is an amazing story with the best in film making according to most reviews and industry buzz. Definitely an Oscar buzz for Franco whether or not the film entices the audience.

I am not a fan of true survival stories captured on film outside of a documentary, but I applaud Franco’s efforts in keeping it real and Danny Boyle’s extraordinary story telling.

Let me know what you think? The film opened on November 5th.