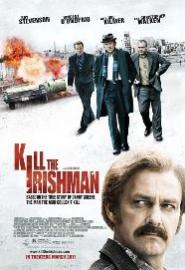 Kill The Irishman from Jonathan Hensleigh (The Punisher) is based on a true story about Danny Greene, an Irish mobster who went up against the Italian Mafia. The film chronicles Greene’s rise from a tough neighborhood in Cleveland to becoming a well known mobster in light of  the countless assassination attempts by the Italian Mafia. Greene’s fearlessness and invincibility eventually led to the collapse of mafia all across the US.

Here is what I think so far, although there is a story to tell,  the most impressive part of the film is the cast Hensleigh was able to pull together to work on his project.  Ray Stevenson (Greene), Christopher Walken, Vincent D’Onofrio, Val Kilmer, Paul Sorvino and more.  I don’t know lately but I think interest in mafia and mobster film have dwindled over the years (in the US at least) and although it’s good to see one based around an Irish mobster’s perspective, the film may not do so well in the US market.

See the trailer below and let me know what you think, have you see it or do you plan to see it?