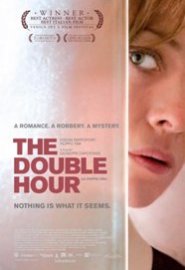 Foreign films are probably some of my favorites.  No matter how strange the plot, the film making techniques, in my opinion, are very realistic and extremely passionate.  I say this because most of the foreign directors have managed to find a true connection in their style of film with the realities of every day life without sugar coating it like we do here in the states, to make it acceptable for all audience types.

With that said, I want to recommend The Double Hour, which opens this coming weekend on a limited engagement in the states. The film was a must see recommend from the London Film Festival, The Venice Film Festival and The Toronto Film Festival.

The synopsis is the story of a woman named Sonia (Ksenia Rappoport)  who moves to Turin, Italy from Eastern Europe in hopes of finding her true love. She decides to find her match on an online dating site. So she meets Guido (Filippo Timi) who is an ex-cop turned security guard. While he courts hers, they both realize they are extremely attracted to one another. However, before they have a chance to get to know one another, Guido is shot during a burglary in the town that he keeps watch over. Sonia is now faced with trying to make sense of what happened while she tries to stay alive.