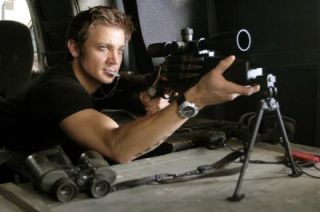 Frankly, I am becoming a fan of Jeremy Renner. I first saw him in person after the Golden Globes a couple of years back and although I did not strike up a conversation with the man, I appreciated his presence in my bubble.

Anyway, he is truly becoming an impressionable actor and one to watch for in years to come. If you aren’t familiar with Jeremy Renner, consider renting The Hurt Locker (2008), The Town (2010) and The Assassination of Jesse James by the…. (2007) just to familiarize yourself with his work.

The funny thing is , when they first announced he would partake in a Bourne film, I am sure most sceptics wondered how anyone could out perform Matt Damon, who was made to play Bourne. Well, first of all, he is not going to replace Matt Damon’s character – Jason Bourne, instead he will be  portraying an operative from another covert government program, which is even more dangerous than Treadstone.  This probably will lead to the possibility of Matt Damon’s character return to battle it out with Renner’s character.

Now, the other thing to keep in mind is that, when they first announced Daniel Craig would be the next James Bond, I was one of the first to be completely bothered by the news, but Craig was able to carry his own weight and has now become a pretty respectable Bond in my opinion.

So, I do believe that, we need an  worry because Jeremy Renner will definitely give you, your money’s worth, providing the script is up to par and the story remains open ended. Stay tuned.