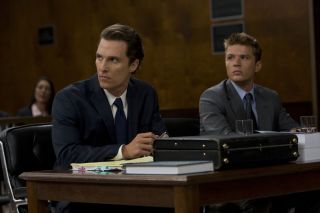 Some movies I choose to see just so I can put my two cents worth about it on paper, and although I knew The Lincoln Lawyer was one of those films, I couldn’t help but think in between my note taking, how cool it would be to make a television series from the movie.  I know there is an audience out there for this sort of thing and from what I pictured in my head, there is at least two solid seasons as a result of it.

The synopsis is about a cocky, street smart L.A. defense lawyer (played by Matthew McConaughey), who has opted to works from his black Lincoln Town Car. His  resources are  ex criminals he has helped in the past and a caring ex-wfe (played by Marisa Tomei).  He is driven around town in a gas guzzler (buying gas at 4.35c a gallon) by a cool chauffeur,  who knows exactly what it takes to protect his boss. With a solid supporting cast, McConaughey’s character is set out to help the good, while fighting the bad while he learns a thing or two about himself along the way. If you can envision it, it’s almost like a lawyer super hero character with a dark past, trying to fight for justice in a super hero kind of way.

The “episode”, otherwise known as the movie, was presented to us like a season premiere of a television show. A 90 minute introduction to the main character’s life and how he came to be. Of course throwing in a very predictable case, which left nothing to our imagination, to solve, only opened doors of course for many many more episodes to come.  Also, it helped that the right person (McConaughey) was chosen to play the lead character.

So, see the movie if you feel like you have to or of course just because you want to stare at Matthew for a good while. And, maybe, just maybe, if we all vote on Facebook, they may consider the  television series. Oh wait, do you suppose McConaughy will do a television series?

One reply to “The Lincoln Lawyer – Film Review”