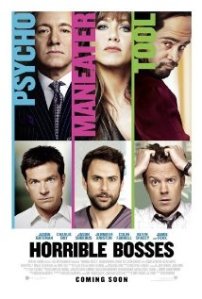 Finally, I forced myself to go to the theatre last night and see Horrible Bosses. I must say I needed the laugh and sure enough the film fulfilled all of my expectations. There are so many components to the film that I want to address that I hope I can cover.

First of all, hurray for slapstick comedy. Second, thank you for an entertaining script Michael Markovitz and John Frances Daley. Third, thank you cast for making it all worth while. This film, in my opinion, is much better than Hangover 1 and for sure alot better than Hangover 2, but you have to appreciate slapstick comedy as well as the Three Stooges to completely understand the purpose of the entire film.

The bosses played by Jennifer Aniston, Kevin Spacey and Collin Farrel were probably close to target with how some bosses can really be, but with a little bit of added exaggeration to taunt the audience into hating their characters. The only thing is I actually loved them even more.

The employees played by Jason Bateman, P.J. Byrne and Jason Sudeikis were  very typical of the three stooges more so than modern day disgruntled employees, but overall the chemistry of the six main characters worked well to created a well balanced and funny film.

The story, of course, is about three employees who find themselves in a bind with their employers and as a result decide to kill them, but how to do it was the challenge they faced as they searched for the most inconspicuous way to “off them”

I will say, I was pleasantly surprised with Aniston, who finally redeemed herself with this movie. I was completely entertained by P.J Byrne’s performance, who in my opinion was the star of the movie and couldn’t stop laughing at Jasom Bateman’s dry sense of approach toward his partners in crime.

I recommend the film for nothing else but a good laugh and I definitely recommend it for die hard fans of The Three Stooges.