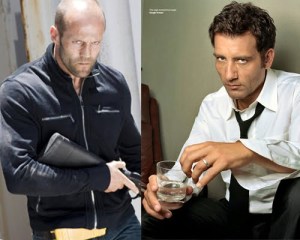 Not the best photo for either one, but you get the picture? Clive Owen and Jason Statham are in the final stages of signing on to star in a movie called The Killer Elite based on Ranulph Fiennes novel The Feathermen. The story of a group of British special forces agents being hunted down by assassins.

I will try my best to stay as professional as possible while writing about this project, but it is very difficult for me when two of my favorite British actors are involved together in a movie project. I am very excited and will count the days to opening. The only problem is,filming is scheduled for “sometime this year” in Australia. I normally hate “sometimes” and worry when a film has been postponed several times in prior years, so I will keep my fingers crossed and gladly follow this project to see if it will ever pan out.