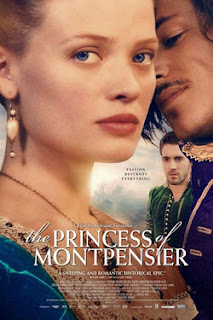 Period films in my opinion are very difficult to watch, unless of course you happen to be a fan of quality filmmaking. With that intro, I would like to recommend The Prince of Montpensier to my readers, who truly appreciate the following: Foreign films, Period Films or simply quality film making.

The Prince of Montpensier is set in 16th Century France, during a time when the country was in turmoil over a religious war. In order to survive the struggles, one had to partake in a marriage of convenience and align themselves with prominent families or simply die trying. The film, directed by Bertrand Tavernier, centers around young Marie de Mezieres who is in love with her cousin Henri, but is forced by her father to marry a well connected Phillippe de Montpensier in order to save the family’s fortune. However, when Philippe is called off to war the morning after their wedding night, Marie and Henri once again become connected and find themselves madly in love with one another.

Clearly, the film is more of a love story and a visual masterpiece, than concrete historical facts and from where I am sitting, it works just fine. I do recommend  the film and give it seven out of 10 hearts. I am not sure however, if it’s being shown in your part of the world in theaters or available for rental.