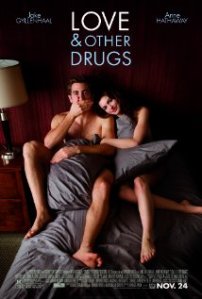 I recently, after much contemplation, saw the film Love and Other Drugs and it has actually taken me about two weeks to write my review about this one.

The thing is, I adore Anne Hathaway and feel most of her sex appeal “was” because she played her roles while leaving most things to our imagination. For some reason, it made us feel better to know there was actually a “America’s sweetheart” from her generation.  But, I saw the film, while I bit my lip and although felt the storyline deserved some attention, it actually was once again sugar coated.

Just to make myself clear, the film is about a young girl named Maggie, who in her 20’s is diagnosed with early stages of Parkinson’s disease. As a result of her condition, she has opted to avoid relationships and settle for one night stands. Of course, that is until she meets Jamie, a pharmaceutical sales person,  and is taken by his charm.  They rest is easy to figure out, girl meets boy, girl rejects boy, boy finds it challenging and does everything in his power to win her heart, she finally gives in, he backs off, she is heartbroken, he focuses on a career and then finally realizes she is the one and so the story goes.

Anyway, most of the film was spent in the nude and for some strange reason, I didn’t feel that full nudity was really necessary to tell their story. I suppose these young actors, in their 20s need to prove something to all of us with their choice to be nude, in at least one film during their career. So be it.

The film is wonderful for the 20 -30 something crowd but a bit boring for those over 35. So See it at your own discretion, I don’t really recommend it.